The clock struck an early hour. I lay still, listening to its steady whispers as time ticked away . . . one second after another. This heirloom has been ticking and chiming a long time.

The clock was Tom’s grandmother’s; the faded paper on the back reveals a date of 1907. We know she received this before she married as her maiden name is on the bill of sale holding fast with yellowed glue. 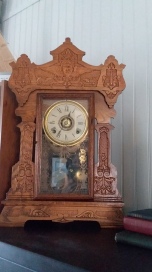 There have been minor adjustments, but as far as we know, this family heirloom has never had a major overhaul.  Often we can hear the unhurried, almost laborious hums, as if the time piece is begging for a new burst of life. Without a timely winding, it would be silent.

As I lay there in the predawn, hearing the unbroken purr, I compared our marriage to this family heirloom. Tom and I have been married fifty six years TODAY.  That’s five decades plus six. Longer than many of you have lived!

Surely, there have been moments, even hours, when our hearts were out of tune with each other. Early years presented its difficulties when a rewinding was in order. But for most of these years, we learned that regular maintenance and a rewinding is mandatory for the continued beating of hearts together.

This clock is an eight day clock—means it HAS to be wound every eight days, or it slows until it stops. With proper care, this constant beating continues.

Normally the meaning of an heirloom is a valuable object that has belonged to a family for several generations. I like this definition I read this week:

“A memorable contribution to family dynamics. You can create heirlooms even more valuable in the hearts of the heirs than any monetary worth could afford them. . .”  Jessica Toothman

We cannot leave our children anything  of  great monetary value. So what will we leave them.  The heirloom we leave our children and our younger friends, those couples we have married and mentored  these fifty years, is an example that  ‘two can become one’. Genesis 2:24, Matthew 19:4,5, Ephesians 5:31. And that it can, indeed, continue ticking and chiming into the good, possible and rewarding union the Creator designed for mankind.

When I lead women’s classes and conferences. I always stress  “you should learn something new about your man every day. Study your man.” Learn what makes him tick and how he ticks and when. And he should be learning how the wife ticks.  It is a life journey, a process of listening as time ticks away.

When the children were young, we tried to rewind  twice a year—I mean, an especially BIG rewinding.  In those early years we would go away for a night and two days—just to fall in young love again.  Those times became a strong foundation for our years then . . . for the NOW in this season on the journey. During other times, we always made time together—quality  time—to walk and talk, getting to know each other’s heart.

The ticks of a marriage are the everyday constant, even mundane kindnesses, the conversations that say, “I hear you”, the unexpected winks, the wiping away of tears. Chimes ring out in  the special events, the days of celebration, those surprise moments on the journey. Just as our clock would be silent without its regular 8-day winding, so our marriage would be silent without the proper attention given these fifty six years of learning how to become one.

So, to our children and grandchildren, we leave you this most valuable, cherished and exciting truth that when two hearts beat as one . . . anything is possible. We leave you an heirloom without any monetary value attached to it. We leave only one . . .  tarnished and worn, with countless mistakes, tears of forgiveness, years of love, much laughter and  thousands of hugs.

And our promise that we will always rewind . . . in order to leave you a beautiful heirloom.

The little girl in me loves bird watching, butterflies, sunrises, sunsets, walks in the rain; the adult I am enjoys the same. I sense God's awesomeness in all of life--what wonder there is in slicing a leek or cutting open a pomegranate. I have many favorite things--a formation of Canadian geese flying overhead, the giggles of my grand daughters, the first ripe watermelon in summer, snowflakes on my face--these gifts from my heavenly Father delight me continually.
View all posts by oct17 →
This entry was posted in Marriage memos and tagged 8-day clock, Ephesians 5:31, Genesis2:24, heirloom, marriage, Matthew 19:4-5. Bookmark the permalink.
Loading Comments...
Comment
×
<span>%d</span> bloggers like this: